And Now a Few Words From Me 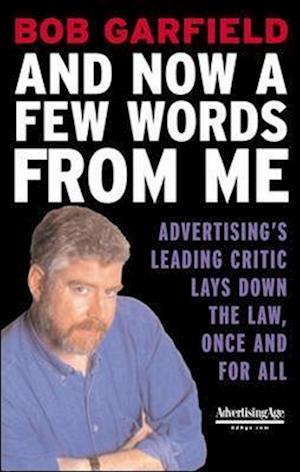 Advertising's most influential critic discusses what is wrong with today's ads - and how to make it right. For almost two decades, Bob Garfield's "Ad Review" column in "Advertising Age" has been a weekly must-read in the marketing world. Garfield's sharp, witty observations have buoyed - and buried - thousands of campaigns. In "And Now a Few Words from Me", Garfield looks at today's advertising and decries the emperor's lack of clothing. Why has "breaking the rules" become such a virtue? What are the ten commandments of advertising that are virtually guaranteed to work - and almost universally ignored? Garfield asks the tough questions and provides piercing - and always dead-on accurate - answers.Lost in today's endless stream of fast-cut production and shock for shock's sake is the idea that advertising, at its essence, is about nothing more complex than communicating a convincing selling idea to a prospective customer. "And Now a Few Words from Me" reminds us that sound and fury alone have always - and will always - signified nothing.Using the uncompromising approach that has become his trademark, Bob Garfield calls for a return to the rules and discipline that make great advertising great.'Each year at least three hundred thousand ads are produced - maybe it's three million - and a shocking percentage of them violate the rules, too, under the pitiful, misguided belief that such is the road to Greatness. But that is not the road to Greatness. It is the road to Extreme Suckiness...' - From Chapter 1. Bob Garfield, the voice behind "Advertising Age's" widely-read column "Ad Review," is today's most respected advertising critic. And right now Garfield is angry at how off-target - and just plain awful - an increasing percentage of ads that cross his desk have become. As Garfield himself writes, "No wonder I drink." "And Now a Few Words from Me" is Garfield's call-to-arms. Sparing no sacred cows, he rails against the mindset that has reduced much of today's advertising to sophomoric silliness that doesn't bother to sell the productor even further the client's strategy.Wielding his pen like a flaming broadsword, Garfield writes: 'Consistency of ethical principles has never been the advertising industry's strongest suit'; 'Agencies themselves struggle with an inherent conflict of interest, because the kind of advertising that best serves the client doesn't necessarily win awards'; and, 'My goal here isn't to leave you a bit infuriated.My goal is to enumerate transgressions so extravagant and insane that you actually bleed through the ears.'Amid his take-no-prisoners observations on the transgressions of advertising, Garfield also provides examples of - and lays out rules for - good advertising. Rules that, while seemingly common sense, are too often forgotten between the initial "brainstorm" and the final reel. Rules that apply "from TV to print to Internet to bas-relief molded in the sea-coastal sand." Rules that, if enforced, would compel advertising practitioners to swallow their bloated egos, return clients' rights to the forefront, and - once and for all - eliminate bad advertising from the face of the earth. "And Now a Few Words from Me" shines a blinding searchlight on what is wrong with today's advertising. Fast, funny, and vintage Garfield, it names names, deflates balloons, and provides a few simple-to-follow rules to get advertising back on track.