An Order For Death 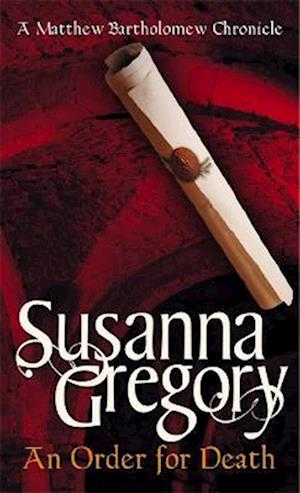 Believers in the theory of nominalism have set some Cambridge colleges at the throats of those who believe them to be heretics and Michael, the Senior Proctor, has his work cut out to keep the peace. When a nominalist is murdered during a riot Michael is certain he will easily find the killer amongst the Dominicans, but before he can get any sense out of them his junior proctor, Walcote, is found hanged and he discovers that his trusted ally had arranged secret meetings at the St Ragelund Convent between men who would not normally be seen together - and the nuns of St Ragelund are renowned for behaviour entirely inappropriate to their calling. Meanwhile Matthew Bartholomew learns that Michael, his lifelong friend, is in all probability the thief who relieved one of the anti-nominalist colleges of some of their most precious papers. If that charge were proved it would put paid to Michael's long term plans to become Master of Michaelhouse - but would he kill to protect himself? Unable to believe his colleague would be capable of such acts, Bartholomew knows the only way he can quiet his own conscience is to solve the murders himself.

Forfattere
Bibliotekernes beskrivelse Theological argument appears to be the motive for a string of murders among the various religious orders in Cambridge, but Matthew Bartholomew believes the baser instincts of his fellow men are the more likely cause.