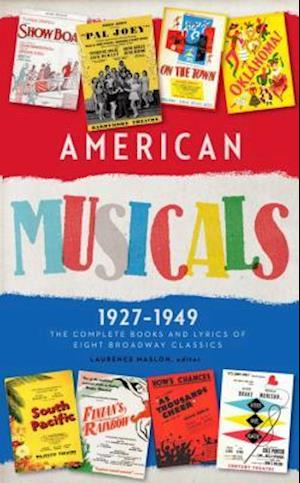 The Broadway musical is one of America's great indigenous popular forms, a glorious hybrid that emerged "out of our speech, our tempo, our moral attitudes, our way of moving" (as Leonard Bernstein put it). Now, in this first volume of a landmark two-volume collection, The Library of America presents eight enduring masterpieces charting the Broadway musical's narrative tradition from the groundbreaking Show Boat (1927) through the start of the genre's Golden Age in 1949. Based on new research, this historic collection presents the complete libretto of each musical in its Broadway opening night version, making these beloved stories available as never before. Irving Berlin and Moss Hart's As Thousands Cheer is published here for the first time. Show Boat and Pal Joey are presented in newly restored versions. South Pacific returns to print for the first time in decades. Each of these classic musicals has evolved over time, receiving many important revivals and new productions. This Library of America volume offers readers unprecedented insight into this living history with a selection of hard-to-find or previously unpublished supplementary items, including lyrics of songs dropped out-of-town or added in later revivals. Lavishly illustrated-- with 32 pages of photographs and other images drawn from the original productions, this volume also contains biographical sketches of the book writers and lyricists; cast lists and other information about the shows' Broadway openings; and detailed accounts of the path each show took on the road to Broadway. AMERICAN MUSICALS 1927-1949 contains:

Music by Richard Rodgers - Book and lyrics by Oscar Hammerstein II LIBRARY OF AMERICA is an independent nonprofit cultural organization founded in 1979 to preserve our nation's literary heritage by publishing, and keeping permanently in print, America's best and most significant writing. The Library of America series includes more than 300 volumes to date, authoritative editions that average 1,000 pages in length, feature cloth covers, sewn bindings, and ribbon markers, and are printed on premium acid-free paper that will last for centuries.