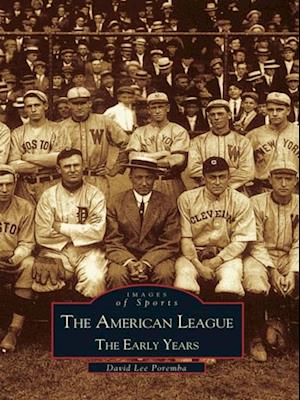 Showcasing two influential decades of home runs, stolen bases, and national heroes, David Lee Poremba invites us to take an in-depth look back through the history of baseball in The American League: The Early Years. Poremba has collected over 200 images and captions in this new volume that documents the fledgling American League and its charismatic teams, from its creation in 1901 to its lively rebirth as America's Pastime in 1920. Founded nearly a century ago when Western League President Ban Johnson renamed the circuit in 1900, the American League defied the norm. Amidst the struggles to name a National League president and the expiration of the National Agreement which governed the baseball world, Johnson leapt into open competition for players and fans. Seen in this extensive photographic collection are the historic players lured away from the National League and into the higher paying American League, including Ty Cobb, 'Shoeless' Joe Jackson, 'Wee' Willie Keeler, Cy Young, Nap Lajoie, and many others. With the introduction of the cork-centered baseball in 1910 and the advent of the Sultan of Swat, Babe Ruth, the game of baseball would change forever.