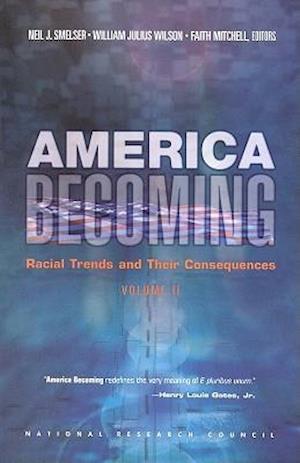 The 20th Century has been marked by enormous change in terms of how we define race. In large part, we have thrown out the antiquated notions of the 1800s, giving way to a more realistic, sociocultural view of the world. The United States is, perhaps more than any other industrialized country, distinguished by the size and diversity of its racial and ethnic minority populations. Current trends promise that these features will endure. Fifty years from now, there will most likely be no single majority group in the United States. How will we fare as a nation when race-based issues such as immigration, job opportunities, and affirmative action are already so contentious today?In America Becoming, leading scholars and commentators explore past and current trends among African Americans, Hispanics, Asian Americans, and Native Americans in the context of a white majority. This volume presents the most up-to-date findings and analysis on racial and social dynamics, with recommendations for ongoing research. It examines compelling issues in the field of race relations, including:Race and ethnicity in criminal justice.Demographic and social trends for Hispanics, Asian Americans, and Native Americans.Trends in minority-owned businesses.Wealth, welfare, and racial stratification.Residential segregation and the meaning of "neighborhood."Disparities in educational test scores among races and ethnicities.Health and development for minority children, adolescents, and adults.Race and ethnicity in the labor market, including the role of minorities in America's military.Immigration and the dynamics of race and ethnicity.The changing meaning of race.Changing racial attitudes.This collection of papers, compiled and edited by distinguished leaders in the behavioral and social sciences, represents the most current literature in the field. Volume 1 covers demographic trends, immigration, racial attitudes, and the geography of opportunity. Volume 2 deals with the criminal justice system, the labor market, welfare, and health trends, Both books will be of great interest to educators, scholars, researchers, students, social scientists, and policymakers.

Forfattere
Bibliotekernes beskrivelse The 20th Century has been marked by enormous change in terms of how we define race. This volume explores trends among African Americans, Hispanics, Asian Americans, and Native Americans in the context of a white majority. It presents the findings and analysis on racial and social dynamics, with recommendations for ongoing research.