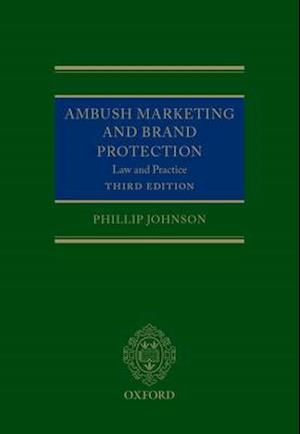 Ambush marketing is any attempt to create an unauthorised or false association with an event thereby interfering with the legitimate contractual rights of the event's official marketing partners. Looking at both traditional intellectual property rights (such as trade marks, copyright, and designs) as they relate to sporting events, and event-specific legislation (such as that of the Olympics and Commonwealth Games), this book gives comprehensive and detailed coverageof ambush marketing. Also considered are the areas of law which can be used to prevent ambush marketing by intrusion (such as laws to prevent fly postering, street trading, the placing of posters and billboards, and control of aerial space). The book addresses the law in the United Kingdom and theEU in detail, and provides substantial coverage of the laws in Australia, Canada, New Zealand, South Africa, and the United States. This new edition addresses the recent Birmingham Commonwealth Games Act 2020 as well as the major changes to the law in Australia with three new laws governing major events and Canada with its major overhaul of trade mark, design, and copyright law.

Forfattere
Bibliotekernes beskrivelse The only book specifically focussed on laws to control ambush marketing in the UK and other jurisdictions, this work gives detailed analysis of legislation specific to particular sporting events as well as the protection of traditional intellectual property rights in this area.