indgår i serie The Aethernet Chronicles 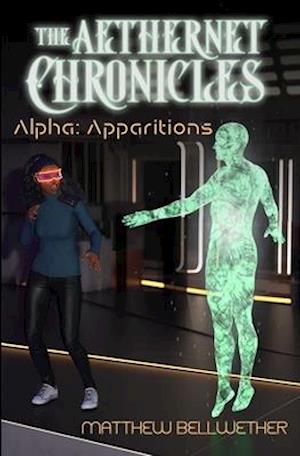 Virtual reality. Grav-ball matches. Exploding vidgogs. Ghosts. Bullies. Black market dealers and Shadow Net hackers. Demons? Until recently, Alex would never have believed any of these things could be a part of her life. Heck, as far as she knew, half of these things didn't even exist. But here they are, and they are NOT doing good things for her anxiety...Alpha: Apparitions is the first book in The Aethernet Chronicles, a suspenseful supernatural cyberpunk adventure for teens and young adults. In a not-too-distant future, science, technology, and progress reign supreme. There are Trad holdouts, but art, religion, mythology, and even history have been relegated to the realm of Esoteric knowledge, and much of it has been scrubbed from the Net by the Ministry of Information. Churches have been repurposed as community wifi beacons. Kids attend schools to specialize in biotechnology, robotics, rapid fabrication, and other cutting-edge fields. Fifteen-year-old Alexandra Novak is an introverted girl who is abruptly uprooted from her comfortable life in Santa Fe and forced to move in with her Aunt Maddie in Seatac, Washington when her parents die in a work mishap. Enrolled at NuVo High, she quickly begins to show prowess with the STEM-based world into which she has been thrust. Until, one day, things begin to go haywire. When a mysterious message appears on her vidgogs, followed by an explosive malfunction in her SoftDev class, she is plunged into even greater dangers. Alongside her one friend, the athletic-but-awkward Peter Figaretti (Fig), she narrowly escapes smart-taxis careening out of control, a mysterious figure who has stalked her all the way from New Mexico, and... is that a ghost I just encountered in the VR simulation? With her life going as haywire as the world around her, Alex is left curious, searching, and trying to survive the aftermath of the question: what actually happened to Jared and Lenasha Novak, and why is A.F.T.E.R. trying so hard to cover it up?100% of net proceeds will go to the California Fire Foundation