- My Own Worst Enemy 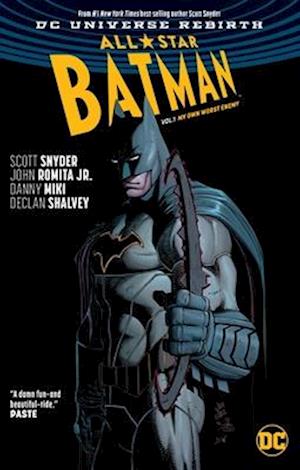 From the #1 NEW YORK TIMES best-selling author of BATMAN, Scott Snyder, comes his newest Dark Knight project as a part of DC Universe Rebirth, ALL-STAR BATMAN VOL. 1: MY OWN WORST ENEMY! Snyder is one of the most critically acclaimed authors in the comics world, with titles that include the genre-defining BATMAN VOL. 1: THE COURT OF OWLS, as well as BATMAN: BLACK MIRROR and AMERICAN VAMPIRE. But this time, he teams with Eisner Award-winning illustrator and comics legend John Romita Jr. (AVENGERS, THE DARK KNIGHT RETURNS: THE LAST CRUSADE) and critically acclaimed artist Declan Shalvey (MOON KNIGHT)!In this new graphic novel, Batman finds himself trying to help old friend Harvey Dent...now known as the villainous Two-Face! The Dark Knight accompanies his foe on a cross-country trip to fix his scarred face and hopefully end the Two-Face identity forever. But when the former Gotham City D.A. sets a plan into motion to free himself, the road gets bumpy and every assassin, bounty hunter and ordinary citizen with something to hide comes out in force with one goal: kill Batman! Handcuffed together on the road to Bat-hell, this is Batman and Two-Face as you've never seen them before!Following the success of COURT OF OWLS, DEATH OF THE FAMILY and ENDGAME, ALL-STAR BATMAN VOL. 1: MY OWN WORST ENEMY is the industry-shaking graphic novel for the Dark Knight, with one of the biggest creative pairings in DC Comics history sharing their take on one of the greatest heroes ever in ALL-STAR BATMAN VOL. 1! Collects issues #1-5.