All Of Us Are Broken 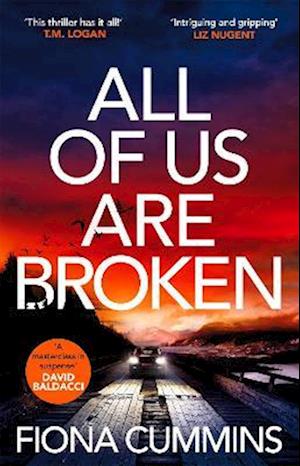 It's been a long time since the Hardwicke family left their home in Midtown, Essex, to go on holiday. But thirteen-year-old Galen has wanted to see the wild dolphins in Scotland's Chanonry Point for as long as she can remember, and her mother Christine - a lone parent since her beloved husband Charlie left - is determined she gets her wish.When DC Saul Anguish is called to the scene of a shooting at the home of an ex-police officer in Midtown, he quickly discovers that this is the first of a trail of killings by a damaged young couple who call themselves Missy and Fox - hell-bent on infamy, their love story is etched in blood. Instructed to ensure he makes the arrest, Saul follows their trail north.The Hardwickes' dream trip turns into a nightmare as they stumble across the couple at a remote hotel on a Scottish loch. When Saul and his forensic linguist partner, Blue, arrive on the scene they witness an impossible choice.Saul must uncover the truth about the couple. But can he then find the strength to lay the ghosts of his past to rest before they break him?