- The Evolution of a Poet 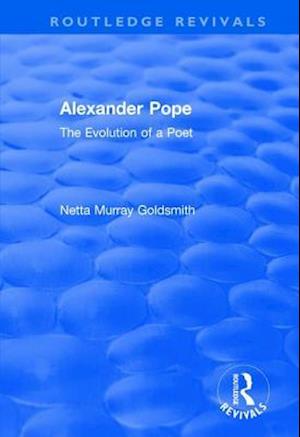 This title was first published in 2002: Making use of the growing body of research in recent years on the nature of creativity, Netta Goldsmith here presents a new view of the famous poet whose personality has long frustrated scholars as elusive. Goldsmith tells the story of Pope's life so as to show the factors-personal and public, psychological and social-which shaped his character and enabled him to secure widespread recognition as a major poet. Discussions of significant works are integrated into the narrative covering main events and key relationships, as well as illustrating points made throughout about Pope's approach to his art. Among other things this book shows how vulnerable Pope felt as a Papist in a time of endemic Jacobite activity, and how his fear of possible prosecution for sedition determined much of his conduct and the way he shaped his career. Alexander Pope: The evolution of a poet not only provides a fresh perspective on Pope, but also on the very nature of literary creativity.