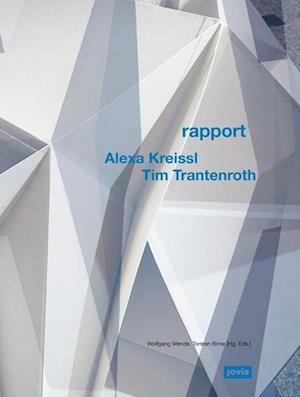 Modernism is celebrating milestone birthdays and remains an object of fascination in architecture and in art. A female and a male artist, both from Berlin, are participating in Rapport: at the Dresden Kulturpalast, they are showing contributions regarding the unfinished history of the modern era. They report about architecture and their era and thereby find a rapport between forms and patterns, recurrence and deviation. Alexa Kreissl starts out at points where everything still appears to be open-ended, or she opens them up herself. Buildings are broken down into their constituents and then put back together again anew - as wild, dynamic collages, works with an explosive nature. With narrow metal or wooden rods, she draws spaces within spaces, permeable and airy, in tension or in balance. The movable and the delicate aspects of her work refute the fixed frameworks of building and thinking. Tim Trantenroth is a translator. He continually translates elements of building into built images. Serial structures and surface patterns from the late modern era in the east and west are represented on transparent film or diffuse transparent paper. It touches upon a recent past era, as well as fundamental questions of creation between space and image, between surface and depth. With this artistic visual ambiguity in mind, one has a different outlook on the everyday built world. Rapport is the first publication by the Zentrum fur Baukultur Sachsen (ZfBK - Center for Building Culture Saxony) that was opened in 2017 in the converted Dresden Kulturpalast. The Kulturpalast itself is one of the incunabula of East German modernism, inaugurated fifty years ago. Text in English and German.