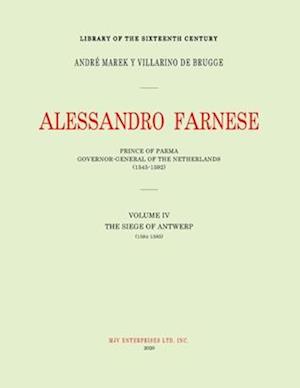 He is called Alexander Farnese (English, Dutch, and German), Alessandro Farnese (Italian), Alejandro Farneseo or Farnesio (Spanish), Alexandre Farn se (French), and Alexandrum Farnesium (Latin), Governor of the Netherlands (1578-1592), Prince, then 3rd Duke (1586), of Parma. Referred by some as the "forgotten Farnese", if you are reading this, you have likely heard of him and are seeking to learn more.

Adventurer and warrior extraordinaire who conspicuously distinguished himself with valor at the Battle of Lepanto and the Battle of Gembloux. Brilliant strategist who saved the Catholic army from being wiped out in France. Underappreciated diplomat, considered the founding father, or, at the very least, having laid the initial cornerstone for the foundation of what is today called the Kingdom of Belgium, through negotiations with the Wallonian provinces. Military genius who, as part of the siege of Antwerp from 1584-1585, orchestrated the blockade of the Scheldt river, touted by historians to be a remarkable feat of engineering.

To date, there are six published biographies about this notable historical figure; two in French, two in Italian, and two in Spanish. Furthermore, none of these biographies have been translated into any other languages. For decades, historians, be they respected scholars or casual enthusiasts, have been clamoring for a biography written in English. The appeals from Anglophone has been answered at last. Done in the style of L on van der Essen's Alexandre Farn se, this magnum opus consists of more than 1,550 pages in five volumes detailing Farnese's life. Out of economic consideration, the 8 illustration plates contained within are in black & white, however, a sixth volume, the addendum, features all illustration plates and more from all five volumes in full-color.

As the subtitle states, this volume concerns the siege of Antwerp.