Al-Ghazali on the Condemnation of Pride and Self-Admiration

- Book XXIX of the Revival of the Religious Sciences 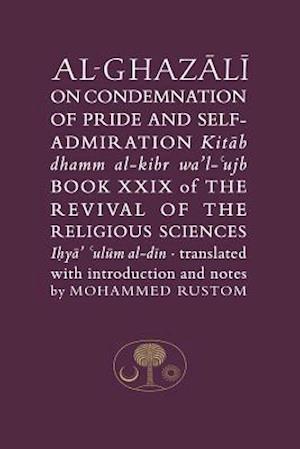 "The Condemnation of Pride and Self-Admiration" is the 29th chapter of "Revival of the Religious Sciences", by the renowned theologian-mystic Abu Hamid Muhammad al-Ghazali (d.1111). Perhaps the most important chapter in the "Revival", it delves into the fundamental spiritual ailments and impediments of the soul, namely pride and self-admiration.

Forfattere
Bibliotekernes beskrivelse "The Condemnation of Pride and Self-Admiration" is the twenty-ninth chapter of "Revival of the Religious Sciences", a monumental work written by the jurist Abu Hamid Muhammad al-Ghazali (d.1111). Perhaps the most important chapter in the "Revival", "The Condemnation of Pride and Self-Admiration" delves into the fundamental spiritual ailments and major impediments of the soul, namely pride and self-admiration. From the beginning of the work, Ghazali states that both pride and self-admiration are forms of spiritual disease. He treats of pride in Part One, firstly condemning this ailment with verses from the Qur'an, describing how it manifests outwardly, how the virtue of humility represents its opposite, what it is and what its symptoms are, as well as the seven reasons for the cause of pride and the root cause of pride in self-admiration. As an antidote, Ghazali offers examples of true humility, showing the manner by which the seven causes of pride can be dealt with, balancing these observations out with a warning against false humility. In Part Two Ghazali discusses self-admiration, condemning it as he did pride in Part One, showing the various ways it manifests inwardly, how it causes negligence, delusion and complacency, how each can be remedied, that self-admiration does not always lead to proud actions, and how the cure lies in the Qur'an, the teachings of the Prophet, proofs based on sound reasoning, as well as recognising that knowledge is a blessing from God.