Al-Ghazali on Proper Conduct for the Recitation of the Qur'an

- Book VIII of the Revival of the Religious Sciences 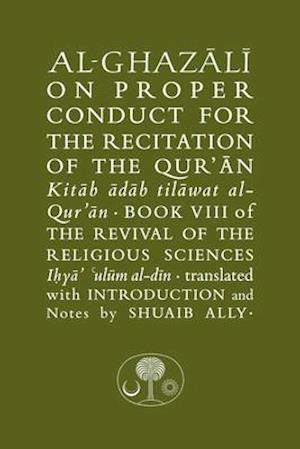 Al-Ghazali on Proper Conduct for the Recitation of the Qur'an is the eighth chapter of Abu Hamid al-Ghazali's magnum opus, the Revival of the Religious Sciences (Ihya' 'ulum al-din), a monumental work of classical Islam written by the renowned theologian-mystic Abu Hamid al-Ghazali (d. 1111). This chapter of the Revival deals with the fundamental importance of the Qur'an and its role in an individual's salvation. After establishing the pre-eminence of the Qur'an and of those who are devoted to its recitation, Ghazali outlines the outer proper conduct for its recitation: the condition of the reciter, the quantity of recitation, properly apportioning the Qur'an, method of writing, measured recitation, crying, taking into account the rights of verses, what to say at the beginning of one's recitation, reciting aloud and beautifying one's recitation, and embellishing it by modulating one's voice. Ghazali then proceeds to identify the inner actions while reciting the Qur'an: understanding the grandeur and stature of the Speech, reverence for the Speaker, presence of mind and not letting one's mind wander, reflection, deeper understanding, ridding oneself of obstacles to understanding, specification, being affected, ascension and divestment. In the fourth and final chapter, Ghazali deals with an issue which continues to be a source of contention today: the problem of the permissibility of generating new interpretations of the Qur'an. Ghazali convincingly argues that a proper engagement with the Qur'an is not restricted by the boundaries of earlier interpretations. This volume also includes a translation of Imam Ghazali's own Introduction to the Revival of the Religious Sciences which gives the reasons that caused him to write the work, the structure of the whole of the Revival and which places each of the chapters in the context of the others.