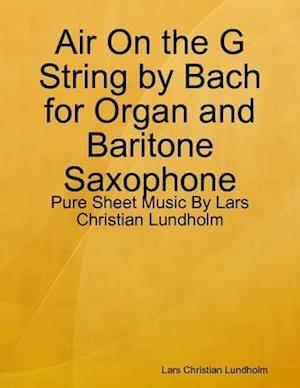 Air On the G String by Bach is from Orchestral Suite No. 3 in D major, BWV 1068 and believed to date back to some time between the years 1717 and 1723. The title itself comes from violinist August Wilhelmj's late 19th century arrangement of the movement from the Orchestral Suite. Often performed at weddings and funerals it has also been featured in numerous times in film and on TV ranging from The Spy Who Loved Me and Seven to CSI:NY and West Wing on TVSheet Music for Baritone Saxophone accompanied by Organ arranged by Lars Christian Lundholm. Air On the G String by Bach is also known by alternative title: BWV 1068, Orchestral Suite Number 3 Movement 2, Bach's Air. - Instrumentation: Organ and Baritone Saxophone- Level: Easy- Score Type: Score and 1 Part- Tempo: Slow- Genre: Baroque- Composer: Johann Sebastian Bach- Year Composed: 1717- Pages (approximate): 8