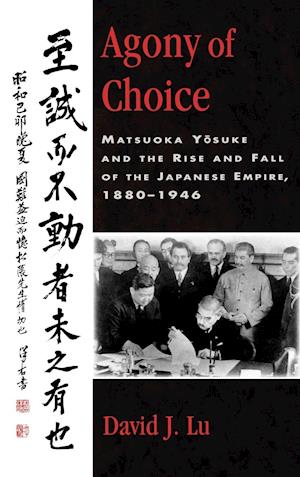 Agony of Choice, the life of Japanese statesman and diplomat Matsuoka Yosuke, offers a vivid narrative of twentieth-century Japanese diplomatic history. Matsuoka was an American-educated Japanese foreign minister who became a vocal advocate of Japanese expansionism in echo of the America he so admired. His promotion of alliances and relationships with countries such as Nazi Germany and the Soviet Union, however, not only led Japan to war with the United States but also led to Matsuoka's involvement with and eventual indictment for atrocities committed during the war. Through extensive archival research and fascinating personal interviews, David Lu explores Matsuoka's pivotal role in the drama of Japan's withdrawal from the League of Nations, empire-building in Asia, and the development of interwar Japanese politics.