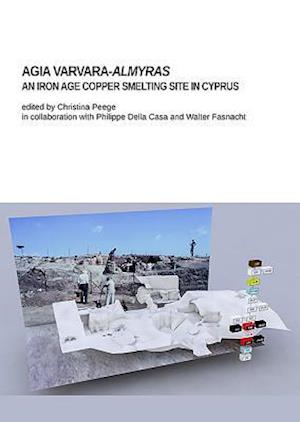 The Iron Age copper smelting site situated near the Cypriot village Agia Varvara is of particular importance among the ancient copper processing places in the Near East because it has revealed spatial as well as technological aspects of copper production in a hitherto rarely-seen depth of detail. Agia Varvara-Almyras: an Iron Age Copper Smelting Site in Cyprus presents the results of a comprehensive post-excavation analysis of the stratigraphy (part I), also of the geology, metallurgical materials (furnaces, tuyeres), finds (pottery, furnace lining, stone tools), as well as a synthesis of the copper smelting technology at Agia Varvara-Almyras (part II). The excavation analysis not only focuses on pyrotechnical information from individual furnaces, but also provides a detailed study of the spatial organisation as well as of the living conditions on the smelting site. An elaborate reconstruction of the features in a 3D model allows the visualisation of formerly-dispersed loci of copper production. Based on this virtual rebuilding of the hillock named Almyras, it becomes clear that archaeometallurgy must be unchained, and the idea of an 'operational chain' must be replaced by a more multidimensional research strategy labelled as an 'operational web'. The present volume aims to stimulate future excavations which pay attention to the reasons behind the exploitation of the riches of the island, as well as to the needs of the markets where the final product was very likely to have been appreciated as a strategic commodity, by power players operating on the island as well as by ordinary people in need of a repair to an everyday commodity which had broken.

Forfattere
Bibliotekernes beskrivelse This volume presents the results of a comprehensive post-excavation analysis of the stratigraphy, geology, metallurgical materials (furnaces, tuyeres), finds (pottery, furnace lining, stone tools), as well as a synthesis of the copper smelting technology at Agia Varvara-Almyras, Cyprus. Illustrated throughout in colour and black & white (100 colour plates)