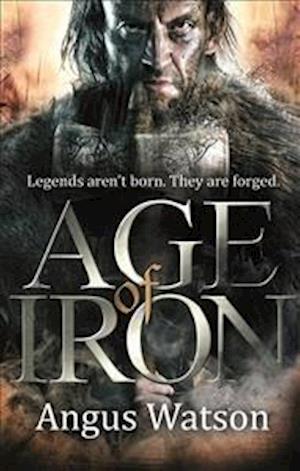 LEGENDS AREN'T BORN. THEY'RE FORGED.Dug Sealskinner is a down-on-his-luck mercenary travelling south to join up with King Zadar's army. But he keeps rescuing the wrong people. First, Spring, a child he finds scavenging on the battlefield, and then Lowa, one of Zadar's most fearsome warriors, who's vowed revenge on the king for her sister's execution. Now Dug's on the wrong side of that thousands-strong army he hoped to join - and worse, Zadar has bloodthirsty druid magic on his side. All Dug has is his war hammer, one rescued child and one unpredictable, highly-trained warrior with a lust for revenge that's going to get them all killed . . . It's a glorious day to die.Look out now for YOU DIE WHEN YOU DIE - first in a new historical fantasy series from Angus Watson.'Watson's tale is gore soaked and profanity laden - full of visceral combat and earthy humor, and laced with subtle magic. The blend of historical accuracy and authorial liberties suggests an old-school sword-and-sorcery epic, though with some modern sensibilities thrown in for good measure!' PUBLISHERS WEEKLY'Would I read the next one? Yes, absolutely. Bring me my hammer, bring my beer, bring it on.' SF CROWSNEST'Watson has created a brilliant and confident debut . . . If you like your fantasy packed with hammer-wielding heroes, bloodthirsty druids, strong female leads, action, intrigue, betrayal, and a brilliantly conceived world then AGE OF IRON is for you.' THE BOOK BEARD'Thoroughly entertaining from the get go . . . I really got a kick out of the AGE OF IRON'THE ELOQUENT PAGEFor more epic action from Angus Watson, check out:West of West TrilogyYou Die When You DieThe Land you Never LeaveWhere Gods Fear to GoThe Iron Age TrilogyAge of IronClash of IronReign of Iron