- Our Way of Making Prayer 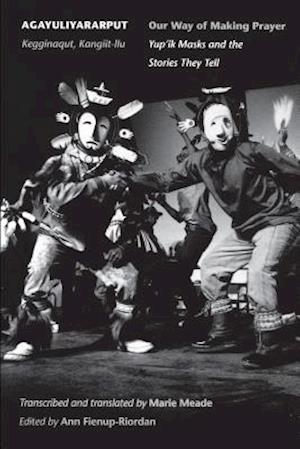 Drawing on the remembrances of elders who were born in the early 1900s and saw the last masked Yup'ik dances before missionary efforts forced their decline, Agayuliyararput is a collection of first-person accounts of the rich culture surrounding Yup'ik masks. Stories by thirty-three elders from all over southwestern Alaska, presented in parallel Yup'ik and English texts, include a wealth of information about the creation and function of masks and the environment in which they flourished. The full-length, unannotated stories are complete with features of oral storytelling such as repetition and digression; the language of the English translation follows the Yup'ik idiom as closely as possible.

Reminiscences about the cultural setting of masked dancing are grouped into chapters on the traditional Yup'ik ceremonial cycle, the use of masks, life in the qasgiq (communal men's house), the supression and revival of masked dancing, maskmaking, and dance and song. Stories are grouped geographically, representing the Yukon, Kuskokwim, and coastal areas. The subjects of the stories and the masks made to accompany them are the Arctic animals, beings, and natural forces on which humans depended.

This book will be treasured by the Yup'ik residents of southwestern Alaska and an international audience of linguists, folklorists, anthropologists, and art historians.