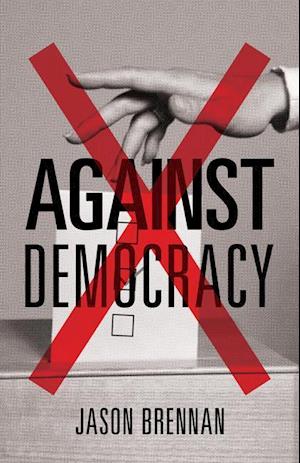 Most people believe democracy is a uniquely just form of government. They believe people have the right to an equal share of political power. And they believe that political participation is good for us--it empowers us, helps us get what we want, and tends to make us smarter, more virtuous, and more caring for one another. These are some of our most cherished ideas about democracy. But Jason Brennan says they are all wrong.

In this trenchant book, Brennan argues that democracy should be judged by its results--and the results are not good enough. Just as defendants have a right to a fair trial, citizens have a right to competent government. But democracy is the rule of the ignorant and the irrational, and it all too often falls short. Furthermore, no one has a fundamental right to any share of political power, and exercising political power does most of us little good. On the contrary, a wide range of social science research shows that political participation and democratic deliberation actually tend to make people worse--more irrational, biased, and mean. Given this grim picture, Brennan argues that a new system of government--epistocracy, the rule of the knowledgeable--may be better than democracy, and that it's time to experiment and find out.

A challenging critique of democracy and the first sustained defense of the rule of the knowledgeable, Against Democracy is essential reading for scholars and students of politics across the disciplines.

Featuring a new preface that situates the book within the current political climate and discusses other alternatives beyond epistocracy, Against Democracy is a challenging critique of democracy and the first sustained defense of the rule of the knowledgeable.

"Jason Brennan is a marvel: a brilliant philosopher who scrupulously studies the facts before he moralizes. In Against Democracy, his elegant method leads to the contrarian conclusion that democratic participation prompts human beings to forget common sense and common decency. Voting does not ennoble us; it tests the virtue of the best, and brings out the worst in the rest."--Bryan Caplan, author of The Myth of the Rational Voter

"The great temptation of political philosophy is to sacralize politics, and we urgently need work that teaches us not to succumb. In this valuable and bracing book, Jason Brennan challenges comfortable pieties and debunks familiar myths about political life in general and democratic rule in particular. I expect that most readers will find plenty with which to disagree--I certainly do--but also that most will find Brennan's arguments unsettlingly difficult to resist with certainty."--Jacob T. Levy, McGill University

"Against Democracy makes a useful set of challenges to both conventional wisdom and dominant trends in political philosophy and political theory, particularly democratic theory. Engagingly written, it is a lively and entertaining read."--Alexander Guerrero, University of Pennsylvania