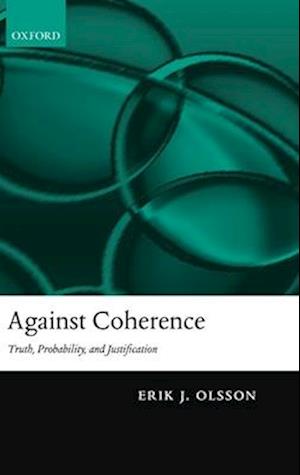 It is tempting to think that, if a person's beliefs are coherent, they are also likely to be true. Indeed, this truth-conduciveness claim is the cornerstone of the popular coherence theory of knowledge and justification. Hitherto much confusion has been caused by the inability of coherence theorists to define their central concept. Nor have they succeeded in specifying in unambiguous terms what the notion of truth-conduciveness involves. This book is the mostextensive and detailed study of coherence and probable truth to date. Erik Olsson argues that the value of coherence has been generally overestimated; it is severely problematic to maintain that coherence has a role to play in the process whereby beliefs are acquired or justified. He proposes that the opposite of coherence, i.e. incoherence, can still be the driving force in the process whereby beliefs are retracted, so that the role of coherence in our enquiries is negative rather than positive. Another innovative feature of Olsson's book is its unified,interdisciplinary approach to the issues at hand. The arguments are equally valid for coherence among any items of information, regardless of their sources (beliefs, memories, testimonies, and so on). Writing in accessible, non-technical language, Olsson takes the reader through much of the history of thesubject, from early theorists like A. C. Ewing and C. I. Lewis to contemporary figures like Laurence BonJour and C. A. J. Coady. Against Coherence will make stimulating reading for epistemologists and anyone with a serious interest in truth.

Forfattere
Bibliotekernes beskrivelse It is tempting to think that, if a person's beliefs are coherent, they are also likely to be true. This truth-conduciveness claim is the cornerstone of the coherence theory of knowledge and justification. Setting standards of precision and clarity, the author argues that the value of coherence has been widely overestimated.