- Rhetoric and the Shaping of Democracy in South Africa 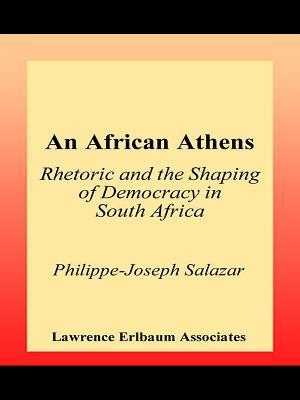 An African Athens offers an analysis of a new ecology of rhetoric--the reshaping of a nation into a democracy through rhetorical means. Author Philippe-Joseph Salazar provides a general view of issues as they have taken shape in the apartheid and post-apartheid South African experience, presenting the country as a remarkable stage for playing out the great themes of public deliberation and the rise of postmodern rhetorical democracy. Salazar's intimate vantage point focuses on the striking case of a democracy won at the negotiating table and also won every day in public deliberation. This volume presents a full-scale rhetorical analysis of a democratic transformation in post-Cold War era, and provides a study of the demise of apartheid and post-apartheid from the standpoint of political and public rhetoric and communication. In doing so, it serves as a template for similar enquiries in the rhetorical study of emerging democracies. Intended for readers engaged in the study of political and public rhetoric with an interest in how democracy takes shape, An African Athens highlights South Africa as a test case for global democracy, for rhetoric, and for the relevance of rhetoric studies in a postmodern democracy.