Affectivity and the Social Bond 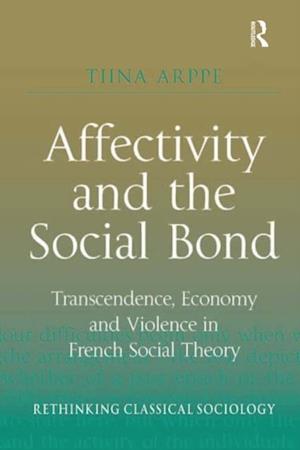 Affectivity and the Social Bond offers a fresh and original perspective on the relationship between affectivity and transcendence in nineteenth and twentieth century French social theory. Engaging in a conceptual analysis of the works of Comte, Durkheim, Bataille and Girard, this book exposes a major transformation brought about by the sociological gaze in understandings of affectivity and its relationship to both sociality and transcendence in nineteenth century social thought: the ambivalence between the transcendence of the social and the immanence of affective experience. Revealing the manner in which questions of violence and economy are intertwined in the sociological analysis of affectivity, Affectivity and the Social Bond reflects upon the problem of controlling affectivity, alongside the political implications and possible dangers of a sociological model which seeks the roots of the social bond first and foremost in the affective realm. A rigorous engagement with the classics of French social theory, their treatment of human affectivity and its relationship to social integration and regulation, this book will appeal not only to sociologists and social theorists, but also to those with interests in social and political philosophy and the history of ideas.