- Emotion in Colonial and Postcolonial Literature

indgår i serie Postcolonialism Across the Disciplines 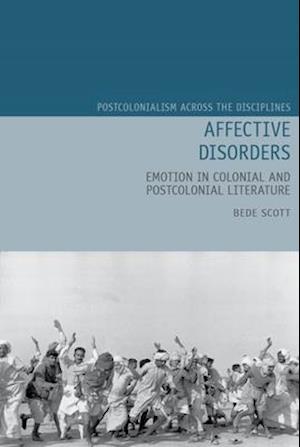 Situated at the intersection of postcolonial studies, affect studies, and narratology, Affective Disorders explores the significance of emotion in a range of colonial and postcolonial narratives. Through close readings of Naguib Mahfouz, Joaquim Maria Machado de Assis, and Upamanyu Chatterjee, among others, Bede Scott argues that literary representations of emotion need not be interpreted solely at the level of character, individual psychology, or the contingencies of plotting, but could also be related to broader sociopolitical forces. We thus find episodes of anger that serve as a collective response to the 'modernity' of wartime Cairo, feelings of jealousy that are inspired by the slave economy of imperial Brazil, and an overwhelming sense of boredom that emerges, in the late eighties, out of the bureaucratic procedures of the Indian Administrative Service. Affective Disorders also explores in some detail the formal consequences of these feelings - the way in which affective states such as anger or jealousy can often destabilize narratives, provoking crises of representation, generic ambivalence, and discursive rupture. By emphasizing the social origin of these emotions, and by analysing their influence on literary discourse, this study provides a deeper understanding of the relationship between various sociopolitical forces and the affective and aesthetic 'disorders' to which they give rise.