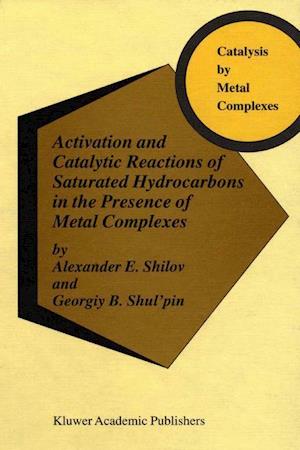 hemistry is the science about breaking and forming of bonds between atoms. One of the most important processes for organic chemistry is breaking bonds C-H, as well as C-C in various compounds, and primarily, in hydrocarbons. Among hydrocarbons, saturated hydrocarbons, alkanes (methane, ethane, propane, hexane etc. ), are especially attractive as substrates for chemical transformations. This is because, on the one hand, alkanes are the main constituents of oil and natural gas, and consequently are the principal feedstocks for chemical industry. On the other hand, these substances are known to be the less reactive organic compounds. Saturated hydrocarbons may be called the "noble gases of organic chemistry" and, if so, the first representative of their family - methane - may be compared with extremely inert helium. As in all comparisons, this parallel between noble gases and alkanes is not fully accurate. Indeed the transformations of alkanes, including methane, have been known for a long time. These reactions involve the interaction with molecular oxygen from air (burning - the main source of energy!), as well as some mutual interconversions of saturated and unsaturated hydrocarbons. However, all these transformations occur at elevated temperatures (higher than 300-500 DegreesC) and are usually characterized by a lack of selectivity. The conversion of alkanes into carbon dioxide and water during burning is an extremely valuable process - but not from a chemist viewpoint.