A Weekend to Pack 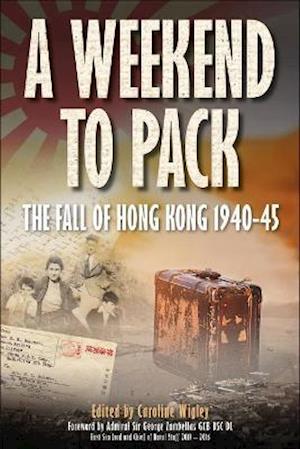 The week beginning 1 July 1940 saw 3,500 British women and children evacuated from the colony of Hong Kong, following threats of invasion from Japan. Few believed the evacuation to be necessary - the Japanese had made similar threats before, which had come to nothing - and all thought that it would be short-lived. But the evacuees, initially billeted in Manila, soon found themselves boarding ships once again, this time bound for Australia. One of the families separated by the evacuation was George Bearman's, electrical engineer at the colony's naval dockyard, and whose letters have recently been discovered in the proverbial chest in the attic. His letters, interspersed with official documents and communications, create an engaging and compelling narrative to bring to life the wider story of this little-known period in history, and a poignant, human thread to take the reader on through the years of war with Japan, following the plight of those evacuated and those left in Hong Kong. In the initial 18 months, George's letters capture the colour and culture of 1940s Hong Kong, with its mix of Chinese customs and British tradition, along with that of the unique situation created by the social skew. While trying to maintain as normal a life as possible, 1940s men suddenly find themselves not only returned to bachelorhood, but having to run a home, and set against the wider background of a home country at war. His letters to his wife also capture the aching loneliness experienced by so many at the time, and create an intimate relationship between storyteller and reader. The three weeks of fighting following the Japanese invasion saw thousands killed - both civilians and military. Civilians were interned and many such as George became prisoners of war. The foreword to the book has been written by Admiral Sir George Zambellas KCB DSC ADC DL, First Sea Lord and Chief of Naval Staff from 2013 to 2016. Letters were the only form of communication available to the ordinary person in the 1940s, and so it's particularly apt that letters should tell this "evocative human story... of an almost unknown dimension of the Second World War," (Sir George Zambellas).

Forfattere
Bibliotekernes beskrivelse Documents the little known role of Hong Kong in the Second World War which had major ramifications and affected many thousands of lives. illustrated