A Transcript of Terror: An Archelaus Wenlock Mystery 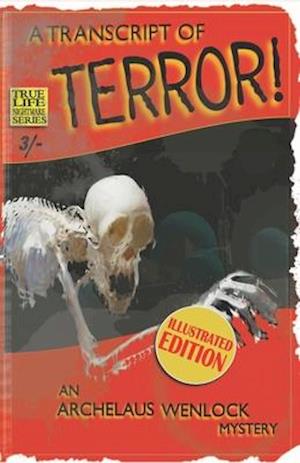 Many women found it difficult to come to terms with life after the War. Up until 1945, many of us had been valued members of His Majesty's Armed Forces and the return to what most people would have considered normality had been a huge shock and it must be said, a huge disappointment. Civilian life for a young woman consisted of little more than a quest for a suitable husband followed by looking after him and his progeny until death offered blessed relief.

That was not for me.

However, after six fruitless months of searching for a suitable position, I grudgingly accepted my mother's constantly offered "...something to fall back on, dear" advice and enrolled in Miss Glenister's Touch Typing, Stenography and Transcription College, Weybridge, thinking that should the worst happen, I might at least be able to keep the wolf from the door. Even as I practised, I determined that this should not be my lot in life.

Fortune smiled on me the day I read the advertisement in "The Lady". It was, on the face of it, merely another job, but when I learned more about it, I determined it was an opportunity I should not let pass.

The reply to my application contained a summons to an office on the first floor of a building in The Strand. This, it turns out, was a meeting with an agent - a proxy - whose job was merely to winnow and weed a final time. I handed over my bona-fides; the agent asked a number of pertinent questions. I showed him examples of my work and that was it: I was told to present myself the following week at Major Wenlock's apartments in Knightsbridge.

The due date arrived and I was welcomed in by a stocky red-haired fellow, whose smile immediately made me warm to him. He showed me to a small ante-room in which I waited for no longer than five minutes before my predecessor, (clearly a rival, since she clutched a portable typewriter and a sheaf of papers to her bosom) scuttled out of the office, her face like thunder. She threw me a glance and eyes ablaze, said to me,

"Good luck!" in a manner that indicated to me that she had found herself wanting in that department.

The red-head peered over the copy of Engineering and Practical Physics Monthly, which he had been perusing the while and said,

"Go right in, Miss. The Major'll be ready for you now." As I walked by him, I couldn't resist saying, sotto voce,

My first sight of Archelaus Wenlock revealed to me a tall, slim gentleman; smartly dressed, and whose narrow, well-trimmed moustache and Brylcreemed hair - slightly grey at the temples - might have singled him out as an RAF type, but for his open, guileless, eager expression; that mixture of public-school-bred confidence and paternalistic superiority, which seemed to me to have much more of the Guards about it. I was not surprised to learn that he had gone to India with the King's Own Hussars after leaving Oxford.

Perhaps it was my determination not to be cowed that led him eventually to declare that it seemed as though I would be suitable.

Some have wondered why I did not simply sit back and enjoy my good fortune. Those people, for the most part, do not know me. That I chose to take advantage of the Major's own uncertainty regarding his wishes and impose myself upon the expedition itself might seem to some to have been rather forward but, when asked what it was about the Wenlock Expedition that made me so determined to be a part of it, I always answer in the same manner: it was so delightfully dotty a prospect, that I simply couldn't let the opportunity pass. A retired Army Major and his former batman armed with a tape-recorder, enthusiasm and very little else, setting out to unearth the secrets of a former Nazi Scientist in the Austrian Alps? I ask you: who could have resisted?