A Touch of Malice 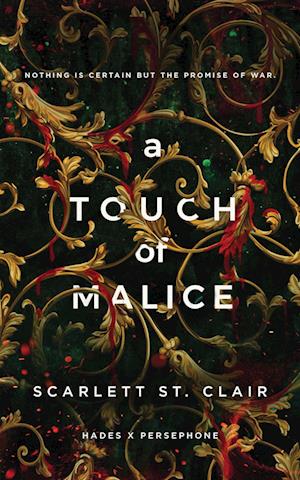 "A Touch of Malice" is the third book in Scarlett St. Clair’s Hades & Persephone series that awakens the ancient Greek myths in a modern setting.

In Scarlett St. Clair’s "A Touch of Malice" Persephone and Hades are engaged to Demeters big disappointment. She summons a snowstorm that freezes all of New Greece and she refuses to stop the blizzard before her daughter cancels the engagement. Persephone’s future lies in the hands of the Greek gods, who are divided in the question. Will they allow the marriage between Persephone and Hades and begin a war win Demeter, or deny them and attack the Lord of the Underworld? Only one thing is certain. War!

Forfatter
Forlagets beskrivelse The next installment in the Hades and Persephone story from bestselling author Scarlett St. Clair. Discover the world of New Athens and the Greek gods in a series that readers are calling "hopelessly addictive.""I am not sure who you think I am," she said. "But let me be clear-I am Persephone, future Queen of the Underworld, Lady of Your Fate-may you come to dread my presence."Persephone and Hades are engaged. In retaliation, Demeter summons a snowstorm that cripples New Greece, and refuses to lift the blizzard unless her daughter calls off her engagement. When the Olympians intervene, Persephone finds her future in the hands of ancient gods, and they are divided. Do they allow Persephone to marry Hades and go to war with Demeter, or prohibit their union and take up arms against the God of the Dead?Nothing is certain but the promise of war.