A Time to Die and a Time to Live

- Disaster to Triumph: Groundbreaking Developments in Care of the Wounded on the Western Front 1914-18 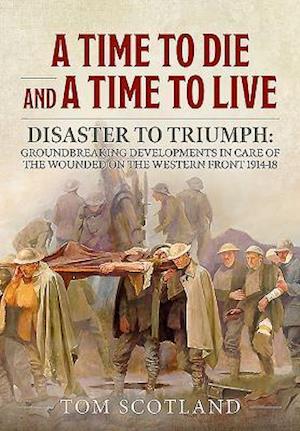 This work sets out to show how tremendous progress was made in the treatment of wounded soldiers during the Great War which significantly improved chances of survival. It describes ground breaking advances in resuscitation, anaesthesia and surgery which established the foundations of modern war surgery. It stresses the importance of blood transfusion.In 1914, definitive management of wounds took place at base hospitals after a journey which sometimes took days. Resuscitation was practically non- existent, anaesthesia was poor and surgical methods were hopelessly inadequate. Many soldiers developed catastrophic wound infections and died as a result of overwhelming sepsis when they should have survived.During the Second Boer War, surgeons followed the teaching of Joseph Lister who had introduced antiseptic surgery in 1867. Antiseptic dressings were applied to prevent harmful organisms gaining access to wounds which were considered sterile. Results were satisfactory, but the Boer War was fought in dry grasslands of the Transvaal and Orange Free State and most wounds were caused by rifle bullets fired from long range and of relatively low energy. The Great War on the Western Front was fought in richly manured fields of France and Flanders and wounds were caused by high energy shell fragments or bullets carrying potentially lethal organisms into their depths. Many wounds were sutured, and antiseptic dressings applied in dressing stations of field ambulances, before patients were transferred to base hospitals for definitive surgery. Results were appalling.Two pioneering surgeons challenged established doctrine and introduced new surgical methods against much opposition and hostility from clinicians who lacked vision to see beyond existing methods of treatment. Resuscitation and anaesthesia were transformed as knowledge increased and by 1917 blood transfusion became very important in improving survival. From May 1918, Field Ambulance Resuscitation Teams were employed by Australian medical personnel to deliver resuscitation and surgery to wounded soldiers within a very short time, saving limbs and lives.When hostilities were over, it was hoped by many that lessons learned during the conflict would be applied subsequently to civilian practice. Professional jealousy and rivalry sometimes prevented this from happening.