A Sport of Nature 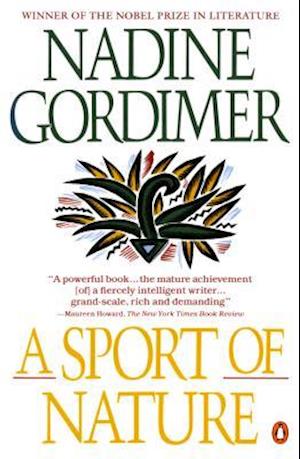 "A moving, powerful book that, in a career rich with distinguished works, could well be considered her masterpiece."--Publishers Weekly Hillela is Nadine Gordimer's "sport of nature": a spontaneous mutation, a new type of untainted person, she is seductive and intuitively gifted for life. A Sport of Nature is the bold, sweeping story of her rise from obscurity to an unpredictable kind of political power. Abandoned by her mother, Hillela is left to be raised by her two aunts in South Africa. At Olga's she might have acquired a taste for antiques and a style of dress to please a suitable husband. At Pauline's she might have developed a social conscience. But Hillela's betrayal of her position as a surrogate daughter so shocks both families that at seventeen she is cast adrift. Swiftly and perilously, her life opens out. She lives as a footloose girl among political exiles on a beach in East Africa, drifting between jobs and lovers, and finally becomes the wife of a black revolutionary. Personal tragedy is ultimately the catalyst for her political development, leading her into a heroic role in the overthrow of apartheid. This is the largest, most reverberant work of fiction we have had yet from one of the world's master novelists.

Forfattere
Bibliotekernes beskrivelse After being abandoned by her mother, Hillela was pushed onto relatives where she was taught social graces. But when she betrayed her position as surrogate daughter, she was cast adrift. Later she fell into a heroic role in the overthrow of apartheid.