A Sense of Direction

- Pilgrimage for the Restless and the Hopeful 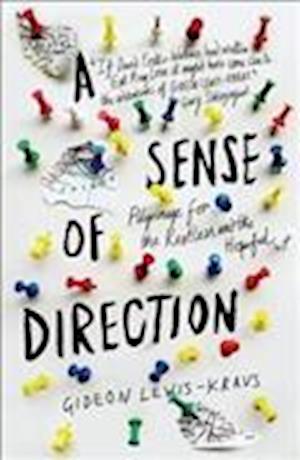 A young secular writer's journey along ancient religious pilgrimage routes in Spain, Japan and Ukraine leads to a surprise family reconciliation in this literary memoirGideon Lewis-Kraus arrived in free-spirited Berlin from San Francisco as a young writer in search of a place to enjoy life to the fullest, and to forget the pain his father, a gay rabbi, had caused his family when he came out in middle age and emotionally abandoned his sons.But Berlin offers only unfocused dissipation, frustration and anxiety; to find what he is looking for (though he's not quite sure what it is), Gideon undertakes three separate ancient pilgrimages, travelling hundreds of miles: the thousand-year old Camino de Santiago in Spain with a friend, a solo circuit of eighty-eight Buddhist temples on the Japanese island of Shikoku, and finally, with his father and brother, a migration to the tomb of a famous Hassidic mystic in the Ukraine.It is on this last pilgrimage that Gideon reconnects with his father, and discovers that the most difficult and meaningful quest of all was the journey of his heart.A beautifully written, throught-provoking, and very moving meditation on what gives our lives a sense of purpose, and how we travel between past and present in search of hope for our future."Beautiful, often very funny... a story that is both searching and purposeful, one that forces the reader, like the pilgrim, to value the journey as much as the destination." New Yorker"If David Foster Wallace had written Eat, Pray, Love it might have come close to approximating the adventures of Gideon Lewis-Kraus" Gary Shteyngart"Gideon Lewis-Kraus has written a very honest, very smart, very moving book about being young and rootless and even wayward. With great compassion and zeal he gets at the question: why search the world to solve the riddle of your own heart?" Dave EggersGideon Lewis-Kraus has written for numerous US publications, including Harper's, The Believer, The New York Times Book Review, Los Angeles Times Book Review, Slate and others. A 2007-08 Fulbright scholarship brought him to Berlin, a hotbed of contemporary restlessness where he conceived this book. He now lives in New York, but continues to find himself frequently on the road to other places.