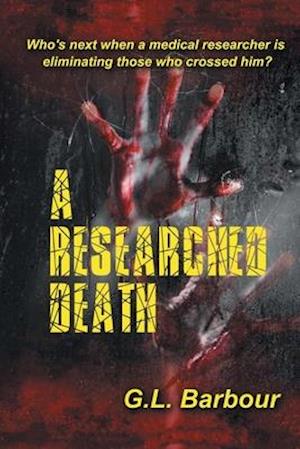 The setting is a mythical for-profit hospital in Cincinnati, Ohio.

The story introduces a practicing surgeon who has a unique research concept but is distracted by personal issues at home.

His research, we learn, is at some risk of losing funding because he hasn't made much progress.

One of his laboratory technicians is applying to the, also mythical, local medical school.

Both the surgeon and the technician get bad news on the same day and they leave the hospital; neither is seen again.

A short time later the director of research, who gave the bad news to the surgeon,

is brutally murdered in his office one evening and the surgeon becomes the main 'person of interest'.

Other murders occur, with very similar circumstances and methods.

who is the chief of staff at the hospital. Their background includes previous murders in and around the hospital.

As suspicions about the surgeon as the killer increase, the chief of staff has to deal with a hospital administrator

that does not appreciate academic medicine and a nursing executive who sees physicians not appreciating nurses for their knowledge and skill.

The story line blends the police procedure with intricacies of medical research funding,

When the detectives are faced with facts that do not fit their initial supposition, they have to make quick adjustment to prevent another murder.