A Republic of Parties? 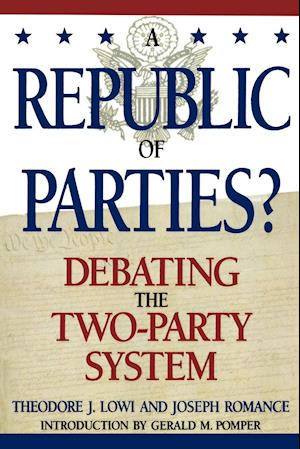 Americans have debated the efficacy of our two-party political system since the founding of the nation. Generations of political scientists have asked: Is the two- party system an antiquated arrangement, so entrenched in our political structure that any third party is destined to be peripheral, or is it an essential component of the political and constitutional order articulated by our founders? This book forces readers to decide for themselves. Theodore J. Lowi and Joseph Romance debate the promises and pitfalls of the two-party system and provide readers with the strongest available arguments for and against the two-party system of government. Lowi argues that the inability of the existing parties to provide adequate representation for our diverse nation is rapidly causing the obsolescence of the two party system. Romance counters that the two-party system is vital for unifying a divided country and instructs Americans about the compromises necessary to maintain a democratic government. With an introduction by esteemed political scientist Gerald Pomper that outlines the history, evolution, and current status of this perennial debate, and a collection of primary documents that covers the entire history of the controversy, this book will be indispensable for classes on American government, political parties, elections, and political science.