- An Urban Exploration of the Chernobyl Exclusion Zone 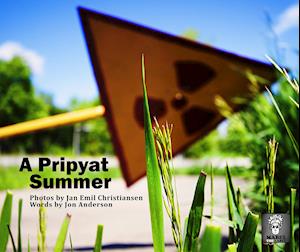 "A Pripyat Summer" is the first of a 2-volume photojournalistic epic documenting Christiansen and Anderson's weirdly insightful urban explorations into the haunted, irradiated, hillbilly shithole that is the Chernobyl Exclusion Zone in the northern Ukraine. Over 3 days they encounter the infamous nuclear power plant, the surrounding contaminated countryside, the ruined "nuclear city" of Pripyat and its rich traditions of unbridled corruption and ineptitude, massive consumption of the local narcotic, decadence, beastiality and rape, catastophic cuisine and cannibalism, wars of imperial conquest and alien abductions. Their visit is peppered with colorful local characters, incomprehensible officials, ass-raping mutants, a sociopathic guide and her drunken driver, two assholes from Belgium who are making their OWN "A Pripyat Summer" (and must be stopped at all costs), and the heavy-metal, hard-partying insurgents, assasins and mercaneries responsible for the greatest nuclear disaster in history. Even Daenerys Targaryen (Queen of the Andals and the Rhoynar and the First Men, Lord of the Seven Kingdoms) puts in an occassional appearance. Or is he just another "Comrade-Dueling-FffARGKing-Banjos-With-Satellite-Dish"? Find out in "A Pripyat Summer".Fil størrelse: 38155 KB