A People's Atlas of Detroit 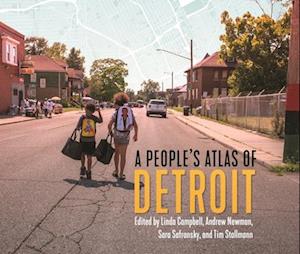 In recent years, Detroit has been touted as undergoing a renaissance, yet many people have been left behind. A People's Atlas of Detroit, edited by Linda Campbell, Andrew Newman, Sara Safransky, and Tim Stallmann comes from a community-based participatory project called Uniting Detroiters that sought to use collective research to strengthen the organizing infrastructure of the city's long-vibrant grassroots sector and reassert residents' roles as active participants in the development process. Drawing on action research and counter-cartography, this book aims to both chart and help build movements for social justice in the city.

A People's Atlas of Detroit is organized into six main chapters. Chapter 1 excavates three centuries of Detroit's past to unearth the histories of racial citizenship that have shaped the city. Chapter 2 adopts a ground-level view of Detroit's contemporary landscapes and highlights the meanings that land holds for residents. Chapter 3 highlights urban farming as one of the key ways that Detroiters have been repurposing vacant land over the last several decades. Chapter 4 analyzes struggles over governance and finances between the state of Michigan and the city of Detroit and other majority African American cities. Chapter 5 moves beyond the gentrification debate-a dominant paradigm since the 1980s-which is neither the only nor the most important factor behind displacement. Chapter 6 focuses on residents' plans and mobilizations to reclaim and rethink public services in the city, including water, transit, and schools. As a whole, the book highlights and explains current visions for radical change-both in Detroit and cities around the world.

A People's Atlas of Detroit weaves together maps, poetry, interviews, photographs, essays, and stories by over fifty residents, activists, and community leaders who offer alternative perspectives on the city's past, present, and future. This volume will reinforce conversations being had by scholars of many disciplines and will inspire communities to continue to raise their voices in the name of representation and change.