A New Beginning in Coventry Beach: A Larissa Carpenter Mystery 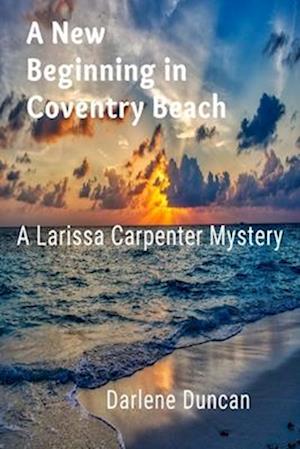 Larissa Carpenter is the one of the richest women in the country. Eighteen months ago, her spouse, Rachel died of a brain aneurysm. Looking for a new beginning, she travels to the small town of Coventry Beach and moves into the house she and Rachel bought just before Rachel died.

Using the name Laurel Carpenito to avoid the notoriety that came with winning the largest lottery jackpot in the state's history she begins to clear her head and think about the future.

Finding the body of a young woman she'd met only twelve hours earlier wasn't part of the future Larissa / Laurel envisioned. As if being a person of interest in one murder wasn't bad enough, she witnesses a woman stab a man on the beach in front of her house.

At the local tea and coffee shop, My Place, Laurel runs into an old high school classmate, who unknown to Larissa / Laurel is now an FBI Agent.

The owner of My Place, Harriet Walsh, has spent two years running from an ex-fiancé turned stalker. Thinking he's lost her trail she has settled down in Coventry Beach. She and Laurel have become friends and when Harriet disappears, Det. Murdoch is unhappy with Laurel's hiring of a search and rescue team to help find Harriet.

Will Larissa find a new beginning in Coventry Beach or will this be just another dip in the rollercoaster ride that her life has become?