A Murder of No Consequence 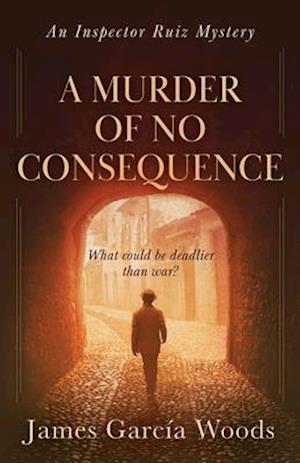 What could be deadlier than war?

On the eve of the Spanish Civil War murder on the streets of Madrid has become so commonplace that it passes largely unnoticed.

For Inspector Paco Ruiz the death of a young woman in Retiro Park has a significance that even he does not fully understand. Battling against official hostility, and attempts on his own life, Ruiz finds himself being pulled deeper and deeper into a dark web of lies and treachery.

As well as providing a thrilling and intriguing mystery, A Murder of No Consequence paints a vivid picture of a society - and a way of life - on the verge of collapse.

Praise for James Garcia Woods:'Beautifully crafted detective story in a very unusual setting ... Perfectly drawn characters. Impossible to put down. Highly recommend this book and want to read everything else this author has written' - Amazon review

'Fast paced, twists in the plot kept me guessing, all set against the awful cruelty and chaos of the civil war' - Amazon review

'As the Spanish Civil war starts to unfold, ex-Inspector Ruiz has another murder to solve. This was a very entertaining read, packed with historical insight' - Goodreads review

James Garcia Woods was educated at the universities of Wales, Manchester and Oxford and taught in England, Iran and Spain before becoming a full-time writer. He lives on the Costa Blanca with his partner, one cat, two dogs and countless fruit trees.