A Message of Truth: The History, Science, and Politics of Christianity 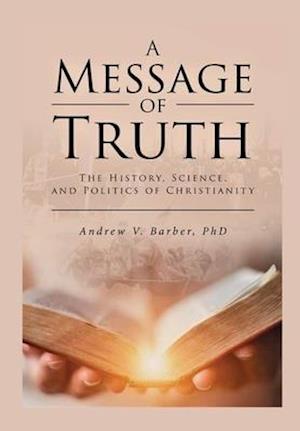 Does God exist? If so, can he be known? Is it possible to have a relationship with Almighty God? Is the Holy Bible accurate? Was it inspired by God? Is Jesus Christ a real person? Did he actually come back from the dead as Christians profess? How is it that Christianity is so widespread? What makes Christianity different from any other religion? And if Christianity is true, why are Christians persecuted? Can these questions be answered with any assurance? Yes, they can. True or false, that is the ultimate question.

This book presents the controversy surrounding Christianity and the Holy Bible and examines the evidence. It invalidates the premises that the Bible is in discord with science, history, and politics. You can decide which arguments are reliable or problematic; what information is factual or contrived; whether to adopt one worldview over another; and what you will believe.

A case is made for the authenticity of the Holy Bible. Its positive influence on humanity has lasted for millennia. It is the most distributed, translated, read, and debated book of all time. It is a guide to life and has shaped morality, politics, and cultures worldwide, especially in the USA. In fact, our founding documents and our nation were founded primarily on the precepts of the Judeo-Christian worldview gleaned from the Old and New Testaments of the Bible. Even those that deny divine intervention being involved in the creation of the universe and the writing of God's Word will find the Bible to be a great source of history, science, and philosophy.

This book was produced to help the reader defend his or her views about the universe, God, life, death, and religion. It is sort of a primer for grooming one to be an apologist. An apologist is a defender of his or her belief system. For example, a lot of people believe in God and many refer to themselves as Christians. But when people of faith are asked why they believe, or how they know that the Bible is true, or what makes Christianity unique, many cannot provide a satisfactory answer. Maybe after reading this book you will feel more confident giving an answer to those who ask about your beliefs, dreams, or hopes. Possibly, you can prompt others to ponder your viewpoint, and why you believe, and how you know.

This book is about exploring possibilities with the ultimate objectives being discovery and enlightenment. That pathway is paved with experience, which alone does not count as proof. Proof requires truth, and it the goal of this book to convey it. Notice, it is one thing to believe in God and quite another to believe God. He speaks to anyone who will listen, through his words and through his creation. Both will point you to the truth, and one will not contradict the other.