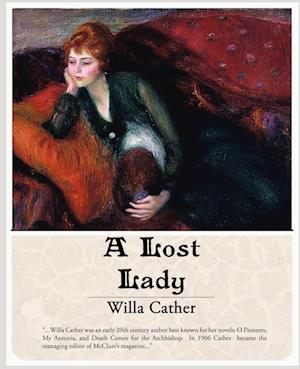 Willa Cather was an early 20th century author best known for her novels; O Pioneers, My Antonia, and Death Comes for the Archbishop. In 1906 Cather became the managing editor of McClure's magazine. As a muckraker journalist Cather co-authored a scathing biography about the head of the Christian Science church, Mary Baker Eddy. A Lost Lady is written in the third person. Niel Herbert is a young man who grows up in Sweet Water and witnesses the decline of Mrs. Forrester for whom he feels very deeply. Cather portrays the moral disintegration of a lovable woman as seen through the eyes of a boy. The West is also depicted in its decline from the idealized age of noble pioneers to the age of capitalist exploitation.