- In the Great War with the 21st (Service) Battalion, the King's Royal Rifle Corps (the Yeoman Rifles) 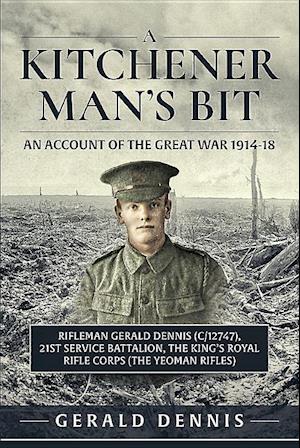 Long out of print, this new edition memoir by an intelligent and articulate "other rank", provides fascinating insights into the Great War infantryman's experience. In autumn 1915, twenty-year-old Gerald Dennis enlisted in Kitchener's Army. Assigned to the 21st (Service) Battalion of the King's Royal Rifle Corps, affectionately known as the "Yeoman Rifles", he experienced fierce fighting on the Somme 1916, during Messines Ridge and Third Ypres in 1917 before deployment to Italy in the immediate aftermath of the Caporetto disaster. Re-assigned to a battalion of the Cameron Highlanders in summer 1918, Dennis took part in the advance to victory before demobilisation in 1919. A vivid and engaging record of wartime service and comradeship, his recollections are not those of the archetype disenchanted ex-soldier: "Whatever impressions the readers of this book draw, I would like to emphasise that I bear no resentment or bitterness. As far as I could, I have drawn a true and honest picture of my army life ... I realise that I did only the merest little bit for my King and Country, not that we gave either special thought. We had volunteered for them."