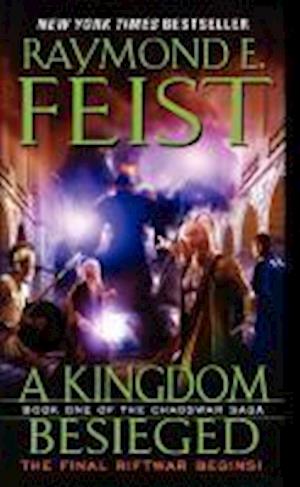 "Feist has the universe firmly under his control."

"Feist has a natural talent for keeping the reader turning pages."

Midkemia's fifth and final Riftwar--the devastating Chaoswar--explodes in the opening volume of Raymond E. Feist's spectacular new epic fantasy trilogy of magic, conflict, and world-shattering peril. A Kingdom Besieged is a breathtaking adventure that brings back Pug--first introduced in Feist's classic debut novel, Magician, and now Midkemia's most powerful sorcerer--who faces a major magical cataclysm that forces him to question everything he's ever held as true and dear...including the loyalty of his beloved son Magnus. The Chaoswar promises to be the crowning achievement in the three decades-long career of a New York Times bestselling master fantasist who rules the sword and sorcery universe along with Terry Goodkind, George R. R. Martin, and Terry Brooks.