A History of the Irish Language

- From the Norman Invasion to Independence 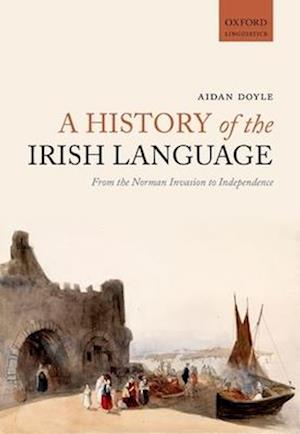 Public speech was a key aspect of politics in Republican Rome, both in theory and in practice, and recent decades have seen a surge in scholarly discussion of its significance and performance. Yet the partial nature of the surviving evidence means that our understanding of its workings is dominated by one man, whose texts are the only examples to have survived in complete form since antiquity: Cicero. This collection of essays aims to broaden our conception of the oratory of the Roman Republic by exploring how it was practiced by individuals other than Cicero, whether major statesmen, jobbing lawyers, or, exceptionally, the wives of politicians. It focuses particularly on the surviving fragments of such oratory, with individual essays tackling the challenges posed both by the partial and often unreliable nature of the evidence about these other Roman orators-often known to us chiefly throughthe tendentious observations of Cicero himself-and the complex intersections of the written fragments and the oral phenomenon. Collectively, the essays are concerned with the methods by which we are able to reconstruct non-Ciceronian oratory and the exploration of new ways of interpreting thisevidence to tell us about the content, context, and delivery of those speeches. They are arranged into two thematic Parts, the first addressing questions of reception, selection, and transmission, and the second those of reconstruction, contextualization, and interpretation: together they represent a comprehensive overview of the non-Ciceronian speeches that will be of use to all ancient historians, philologists, and literary classicists with an interest in the oratory of the RomanRepublic.In this book, Aidan Doyle traces the history of the Irish language from the time of the Norman invasion at the end of the 12th century to independence in 1922, combining political, cultural, and linguistic history. The book is divided into seven main chapters that focus on a specific period in the history of the language; they each begin with a discussion of the external history and position of the Irish language in the period, before moving on to investigate theimportant internal changes that took place at that time. A History of the Irish Language makes available for the first time material that has previously been inaccessible to students and scholars who cannot read Irish, and will be a valuable resource not only for undergraduate students of the language,but for all those interested in Irish history and culture.

Forfattere
Bibliotekernes beskrivelse Public speech was a key aspect of politics in Republican Rome, yet the partial nature of the available evidence means that our understanding of its workings is dominated by one man: Cicero. This volume explores the oratory of the Roman Republic as practiced by individuals other than Cicero, focusing on the surviving fragments of such oratory.This book traces the history of the Irish language from the time of the Norman invasion to independence. Aidan Doyle addresses both the shifting position of