A Guide to Treatments That Work 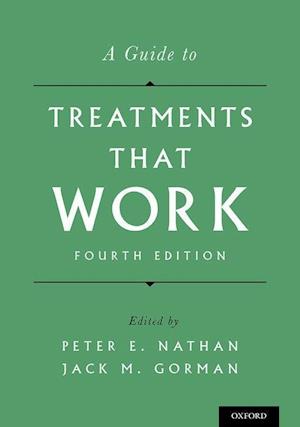 Like its predecessors, this fourth edition of A Guide to Treatments That Work offers detailed chapters that review the latest research on pharmacological and psychosocial treatments that work for the full range of psychiatric and psychological disorders, written in most instances by clinical psychologists and psychiatrists who have been major contributors to that literature. Similarly, the standards by which the authors were asked to evaluate themethodological rigor of the research on treatments have also remained the same. Each chapter in A Guide to Treatments That Work follows the same general outline: a review of diagnostic cues to the disorder, a discussion of changes in the nomenclatures from DSM-IV to DSM-5, and then a systematic review of research, most of which has been reported within the last few years, that represents the evidence base for the treatments reviewed. In all, 26 of the volume's 28 chapters review the evidence base for 17 major syndromes. Featuring this coverage isa Summary of Treatments that Work, an extended matrix offering a ready reference by syndrome of the conclusions reached by the chapter authors on treatments that work reviewed in their chapters. New to this edition are two chapters at the beginning of the book. Chapter 1 details two perplexing issues raised by critics ofDSM-5: the unrealized potential of neuroscience biomarkers to yield more accurate and reliable diagnoses and the lingering problem of conflicts of interest in pharmaceutical research. Chapter 2 contrasts Native American and western ways of identifying effective treatments for mental and physical disorders, concluding that "evidence-informed culture-based" interventions sometimes constitute best practices in Native communities. Two chapters detailing pharmacological treatments forpediatric bipolar disorder (Chapter 9) and pediatric depressive disorder (Chapter 12) have also been added. More than three quarters of the chapters are written by colleagues who also contributed to most or all of the previous editions. Hence, this new edition provides up-to-date information on the quality ofresearch on treatment efficacy and effectiveness provided by individuals who know the research best.

Forfattere
Bibliotekernes beskrivelse Like its predecessors, this fourth edition of A Guide to Treatments That Work offers detailed chapters that review the latest research on pharmacological and psychosocial treatments that work for the full range of psychiatric and psychological disorders.