A Guide to Thermal Physics: from the Fundamentals thru Callen-Level Equilibrium Thermodynamics 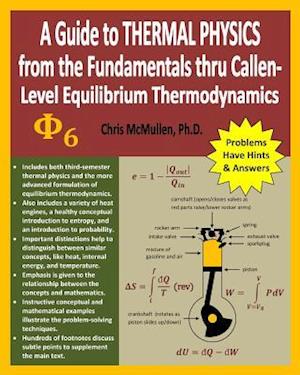 CONTENT: The beginning chapters are largely geared toward providing a solid foundation of the fundamental concepts and their relationship with the mathematics. The material from these chapters is intended to serve as a valuable introduction for beginning students and self-learners, and also as a useful review for advanced students. The later chapters grow increasingly in-depth: For example, the treatise of heat conduction discusses the integral in a variety of forms and even compares it to more familiar electrical concepts; the chapter on heat engines derives the Carnot efficiency in general using the entropy change integral, and covers a variety of cycles, including the endoreversible engine; and thermodynamics includes not only the usual thermodynamic square, but also the more general octahedron and cross polytope.

PREREQUISITES: No previous exposure to thermal physics is assumed. The student should be familiar with the techniques of calculus; a brief review of some relevant techniques, such as partial differentiation, is included.

IMPORTANT DISTINCTIONS: Boxes of important distinctions are included in order to help students distinguish between similar concepts - like heat, temperature, and internal energy.

TABLE OF EQUATIONS: There is a handy table of equations organized by topic on the back cover of the textbook. This also includes the thermodynamic square.

CONCISE OUTLINE FORMAT: The text is conveniently organized by specific topic to help students who may not be reading straight through, but who may be searching for a specific idea or who may be reviewing material that they read previously. There is also a handy index to help locate concepts quickly. Examples and important notes clearly stand out from discussions of concepts.

MATHEMATICAL & CONCEPTUAL EMPHASIS: There is much emphasis both on learning the mathematics precisely and understanding the concepts at a deep, precise level. An underlying idea is that students should not guess at concepts, but that concepts are mathematically motivated: Let the equations be your guide.

NOTES: Several notes are boxed to describe important points, common mistakes, and exceptions. Hundreds of footnotes are included to discuss subtleties without interrupting the flow of the text.

PRACTICE: The end of each chapter has a good selection of instructive conceptual questions and practice problems.

HINTS & ANSWERS: 100% of the conceptual questions have both hints and answers, since it's crucial to develop a solid understanding of the concepts in order to succeed in physics. Some of the practice problems also have answers.