A Greek-English Lexicon of the Septuagint 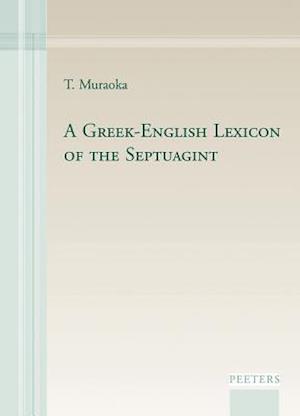 This complete lexicon supercedes its two earlier editions (1993; 2002). The entire Septuagint, including the apocrypha, is covered. For the books of Samuel, Kings, Chronicles, and Judges the so-called Antiochene edition is fully covered in addition to the data as found in the standard edition by Rahlfs. Also fully covered are the two versions of Tobit, Esther, and Daniel. Based on the critically established Gottingen edition where it is available. If not, Rahlfs's edition is used. For close to 60% of a total of 9,550 headwords all the passages occurring in the LXX are either quoted or mentioned. A fully fledged lexicon, not a glossary merely listing translation equivalents in English. Senses defined. Important lexicographical data such as synonyms, antonyms, idiomatic expressions, distinction between literal and figurative, combinations with prepositions, noun cases, syntagmatic information such as what kind of direct or indirect objects a given verb takes, what kind of nouns a given adjective is used with, and much more information abundantly presented and illustrated with quotes, mostly translated. High-frequency lexemes such as prepositions and conjunctions fully analysed. Data on contemporary Koine and Jewish Greek including the New Testament taken into account. Morphological information provided: various tenses of verbs, genitive forms of nouns etc. Substantive references to the current scientific literature. An indispensable tool for students of the Septuagint, the New Testament, Hellenistic Judaism, and the Greek language.