A Grammar of the Common Good 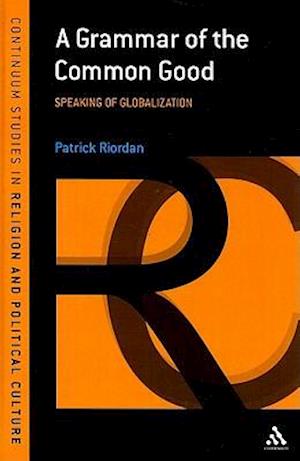 Patrick Riordan's timely study analyzes the concept of the common good in light of recent heightened interest in globalization.Globalization: the catch-all term used to refer to a complex reality whereby humanity faces global challenges to do with a shared environment - global warming, a global economic order in the absence of significant global governance, international institutions which lack independence from the member states which comprise them, and the possibility of violence, whether using a car- or plane-bomb or nuclear weapons, in the name of whatever cause. Such realities raise major questions about the intellectual and moral resources available to humanity to deal with the challenges posed, and the topic of the common good has enjoyed an explosion of interest recently in various disciplines and in different areas of life.Patrick Riordan's timely study analyzes the concept of the common good as it is used in debates within political philosophy, economics, theology and most recently globalization, clarifying distinctions in definition and offering clarity and precision for a common language appropriate to debates on globalization.In recent years the study of the nature and function of religion with respect to politics has seen enormous changes.This important series provides a range of books devoted to furthering this study, and aimed at those studying and researching in this area across both disciplines.Titles in this series look specifically at the relationship between religion and political culture. Drawing upon a broad range of religious perspectives the series is open for studies of historical as well as current phenomena in political culture. It seeks not only to inform but to provoke debate at a time when religion is gaining increasing prominence in the public realm.