A Government that Worked Better and Cost Less? 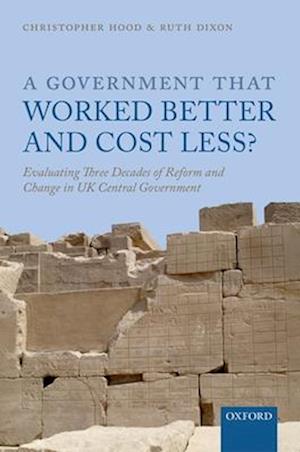 Forfattere
Forlagets beskrivelse The intensification of marketing activities in recent years has led the public to become much more aware of its role as consumers. Yet, the increased visibility of marketing materials and associated messages in everyday life is in contrast with the often little understood inner workings of the marketing profession itself, despite the widespread recognition of marketers as key agents in shaping the face of global capitalism.Inside Marketing offers a theoretically informed critical perspective on contemporary marketing practice and its growing cultural, economic, and political influence worldwide. This book brings together leading scholars and practitioners from the fields of business, history, economic sociology, and cultural anthropology, to analyse the inner workings and outer effects of marketing as a material social practice, an ideology, and a technique. Their work raises some important and timelyquestions. How has marketing transformed the pharmaceutical industry and what are the consequences for our lives? How does marketing influence the way we think of progress and modernity? How has marketing changed the way we think of childhood? And how does marketing appropriate the creativity of consumers forprofit?This book offers scholars, policy-makers, and practitioners a theoretical and conceptual understanding of how marketing works as a cultural institution and as an ideology.Does globalization erode the nation state's capacity to act? Are nation states forced to change their policies even if this goes against the democratic will of their electorates? How does government action change under conditions of globalization? Questions like these have not only featured highly in political debates in recent years, but also in academic discourse. This book seeks to contribute to that debate. The general question it addresses is whetherglobalization leads to policy convergence - a central, but contested topic in the debate, as theoretical arguments can be advanced both in favour of and against the likelihood of such a development. More specifically, the book contains detailed empirical case studies of four countries (the United States, theUnited Kingdom, Germany, and Switzerland) in a policy area where state action has been particularly challenged by the emergence of world-wide, around-the-clock financial markets in the last few decades, namely that of the regulation and supervision of the banking industry.Based on careful analysis of historical developments, specific challenges, the character of policy networks and institutions, and their interaction in the political process, this book argues that nation states still possess considerable room for manouevre in pursuing their policies. Even if they choose supranational coordination and cooperation, their national institutional configurations still function as filters in the globalization process.This book is of particular value to readers interested in the politics and policies of globalization, the interaction of business communities and the political system in different countries, and students of comparative politics interested in detailed case studies of policy-making.The definitive Oxford Textbook of Palliative Medicine, now in its fifth edition, has again been thoroughly updated to offer a truly global perspective in this field of extraordinary talent and thoughtfulness.Updated to include new sections devoted to assessment tools, care of patients with cancer, and the management of issues in the very young and the very old, this leading textbook covers all the new and emerging topics since its original publication in 1993. In addition, the multi-disciplinary nature of palliative care is emphasized throughout the book, covering areas from ethical and communication issues, the treatment of symptoms and the management of pain.This fifth edition of the Oxford Textbook of Palliative Medicine is dedicated to the memory of Professor Geoffrey Hanks, pioneer in the field of palliative medicine, and co-editor of the previous four editions. Winner in the Medicine category of the British Medical Association Book Awards, this is a truly comprehensive text, no hospital, hospice, palliative care service, or medical library should be without this essential source of information.The UK is said to have been one of the most prolific reformers of its public administration. Successive reforms have been accompanied by claims that the changes would make the world a better place by transforming the way government worked. Despite much discussion and debate over government makeovers and reforms, however, there has been remarkably little systematic evaluation of what happened to cost and performance in UK government during the last thirty years. A Government that Worked Better and Cost Less? aims to address that gap, offering a unique evaluation of UK government modernization programmes from 1980 to the present day. The book provides a distinctive framework for evaluating long-term performance in government, bringing together the 'working better' and 'costing less' dimensions, and presents detailed primary evidence within that framework.This book explores the implications of their findings for widely held ideas about public management, the questions they present, and their policy implications for a period in which pressures to make government 'work better and cost less' are unlikely to go away.
Bibliotekernes beskrivelse Marketing is a ubiquitous feature of contemporary society, and its presence in our lives is something we are ever-more aware of as the intensity and scope of its activities has increased. Inside Marketing offers a critical perspective on marketing and its growing influence on today's world from a pre-eminent group of scholars and practitioners.This book contains detailed case studies on banking policy in 4 countries (the United States, the United Kingdom, Germany, and Switzerland). The main conPRIZES:Winner of Winner of the 2015 Louis Brownlow Book Award Winner of the 2016 W. J. M. Mackenzie Prize awarded by the Political Studies Association.