A First Course in Wavelets with Fourier Analysis 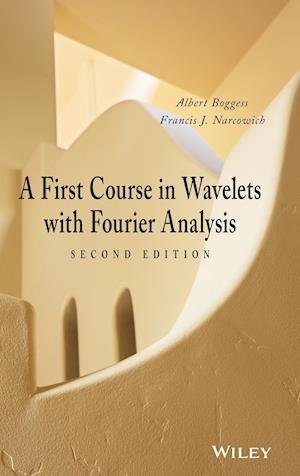 A comprehensive, self-contained treatment of Fourier analysis and wavelets-now in a new edition Through expansive coverage and easy-to-follow explanations, A First Course in Wavelets with Fourier Analysis , Second Edition provides a self-contained mathematical treatment of Fourier analysis and wavelets, while uniquely presenting signal analysis applications and problems. Essential and fundamental ideas are presented in an effort to make the book accessible to a broad audience, and, in addition, their applications to signal processing are kept at an elementary level. The book begins with an introduction to vector spaces, inner product spaces, and other preliminary topics in analysis.Subsequent chapters feature: The development of a Fourier series, Fourier transform, and discrete Fourier analysis Improved sections devoted to continuous wavelets and two-dimensional wavelets The analysis of Haar, Shannon, and linear spline wavelets The general theory of multi-resolution analysis Updated MATLAB code and expanded applications to signal processing The construction, smoothness, and computation of Daubechies' wavelets Advanced topics such as wavelets in higher dimensions, decomposition and reconstruction, and wavelet transform Applications to signal processing are provided throughout the book, most involving the filtering and compression of signals from audio or video. Some of these applications are presented first in the context of Fourier analysis and are later explored in the chapters on wavelets. New exercises introduce additional applications, and complete proofs accompany the discussion of each presented theory. Extensive appendices outline more advanced proofs and partial solutions to exercises as well as updated MATLAB routines that supplement the presented examples.A First Course in Wavelets with Fourier Analysis , Second Edition is an excellent book for courses in mathematics and engineering at the upper-undergraduate and graduate levels. It is also a valuable resource for mathematicians, signal processing engineers, and scientists who wish to learn about wavelet theory and Fourier analysis on an elementary level.

Forfattere
Bibliotekernes beskrivelse Presenting the subject from the point of view of signal analysis, A First Course in Wavelets with Fourier Analysis, 2nd Edition provides a self-contained mathematical treatment of the subject that is accessible to a broad audience.