A Dignified Passage through the Gates of Hades 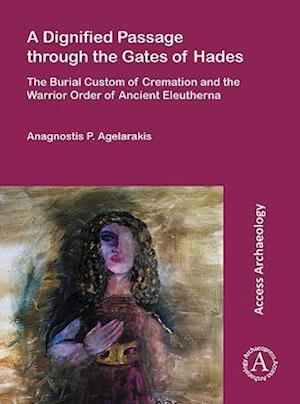 Archaeological excavations at the Eleuthernian burial ground of Orthi Petra continue to yield significant elements of the archaeo-anthropological record, the subject matter of continuous interdisciplinary research, outreach, national and international acclaim. Among a plethora of features discovered, unearthing components of a unique nexus to the Geometric-Archaic Periods, was an unspoiled time capsule in astonishing contextual preservation, a hand carved tomb with a dromos into the softer bedrock material of Orthi Petra. Designated in short as contextual association A1K1, the tomb as a funerary activity area yielded a remarkable collection of jar burials in complex internal tomb stratification, containing cremated human bones accompanied by a most noteworthy assembly of burial artifacts of exquisite wealth, along a multitude of traces of "fossilized" behavior left resolutely behind by the ancients in their transactions on the paths of their perceived realities and obligations of life norms, but also of the arcane matters of afterlife. Such evidentiary data of funerary behavior in conjunction with the rest of the archaeo-anthropological record afford the opportunity to document where possible and deduce where pertinent aspects of the transitional period, overlapping the end of life's journey and the unfolding of death in light of a number of the principles, the values, and the modes that guided the lives of the ancients as mortuary habits may have the transcending power to be revealing of certain codes of ante mortem conduct, of main beliefs, of ideologies and viewpoints, characteristic of their ideational world and hence of their attitudes toward, and expectations of, post mortem life. Such understandings, based on critical and deductive thinking combined with the data offered through the scope of anthropological archaeology and forensics by the decoding of traces permanently recorded on bone and dental surfaces, construct a persuasive dialectic, regarding important facets of the human condition in Eleutherna from Geometric through Archaic times.