A Dictionary of the Bengalee Language

- In Which the Words Are Traced to their Origin, and their Various Meanings Given (Part 2) 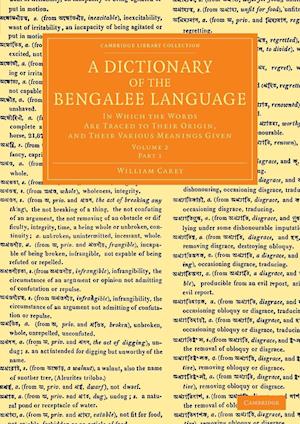 The language of Bangladesh, West Bengal and parts of Tripura and Assam, Bengali is the sixth most spoken language in the world. A member of the Indo-Aryan family, with its origins in Sanskrit, it has over 230 million speakers. Published in 1825, this is the second volume of a revised three-part dictionary of Bengali, compiled by the Baptist missionary William Carey (1761-1834) during his time in India. Its purpose was to assist Carey's European students at Fort William College in Calcutta, and he endeavoured to include every simple word used in the language, along with all the compound terms found in Bengali literature. Containing over 100,000 entries in Bengali script with English translations, and providing etymologies for most words, it remains of great interest to linguists today. Carey's reference works on Marathi and Sanskrit are also reissued in this series.

Forfattere
Bibliotekernes beskrivelse Published in 1825, this is the second volume of a revised three-part dictionary of the Indo-Aryan language Bengali. Containing over 100,000 entries with English translations, it was intended to include every simple word in the language. The author's reference works on Marathi and Sanskrit are also reissued in this series.